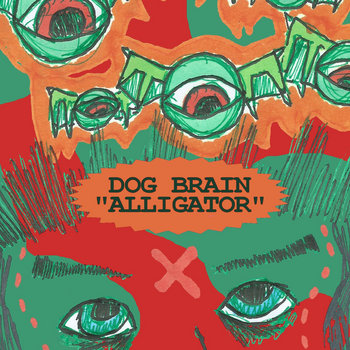 Waybridge Records reached out to us about doing some features on their new group. So for today’s review, we finally get the pleasure of introducing our readers to Dog Brain through their newest album, Alligator! Now I’ll be honest, they self describe as psychedelic punk/power pop and I’ve never been the biggest fan of psychedelic rock to begin with, but they really took me by surprise and I ended up really like what I heard on this album.

The first of the six songs, Dumptruck of Love, starts off with a strong melody that really makes the psychedelia influence evident. The vocals don’t take precedence in the song, but they’re not completely overpowered by the instruments in the song. It’s an incredibly catchy song, and the one that really caught my attention and drew me in to the artist and album. The second track, sing a Stupid Song, has a deeper entrance than the first track, taking a path that isn’t quite as melody driven. There’s still a strong presence of psychedelia based melody, but it’s not as evident as in the first track. It fits nicely after the first track though, and continues the album in a very enjoyable way. Little Man is the third and shortest track on the album, and has a more acoustic feel as it starts off, with slightly harsher vocals as the song continues. This makes the first half of the album a nice mix in my opinion, and really sets the point of the album where I knew that this was an extremely great find.

The fourth song on the album, Don’t Wanna B With U, marks a return to the strong melodic psychedelia presence introduce in the first album, but with a sparser twist to it that makes it stand out from the other songs on the album. The vocals are a little huskier in this song, and that helps it blend into the slightly groovier beginning of the fifth track. A Minor Victory seems to take the huskier vocals of the preceding track and turn the overall feeling into the main musical backing. The vocals have a small touch of the harshness first heard in Little Man, managing to glue the varying sounds on the album together into one gorgeous song. The final track on the album, Trouble Knockin at my Door, starts off slow and melodic, and is soon joined by vocals that fluctuate perfectly between harsh and deep sounding and softer and more melodic sounding. There a good energy to this song, and it really cements the album in my mind, leaving me with excitement for whatever the group decides to put out next.

All in all? I really like this album. I’m glad that they came to our attention and that we got this chance to share them with you. I definitely recommend listening to this album, as well as checking out the two EPs. Alligator is available on the Waybridge Records bandcamp, along with Part II which collects the band’s previous two EPs. You can also find more information on Waybridge Records and Dog Brain through their facebook pages.